In addition to performing concerts in the Twin Cities area, JoAnn travels the Mississippi, Ohio and Cumberland Rivers as a Performing Artist and Guest Speaker for American Cruise Lines.

In this role as Guest Speaker, she has taken over 100 week long riverboat trips aboard the beautiful American Cruise Lines riverboats: St. Paul to New Orleans, Pittsburgh to Cairo and up the Cumberland River to Nashville.  That works out to about 37 trips between St Paul and New Orleans - or about 66,000 miles of river travel!

Her popular daily talks onboard are enriched by her biology background,  captivating speaking style, love of history and her experiences growing up on and in the Upper Mississippi River in La Crosse, Wisconsin.

“My childhood was spent happily exploring the wildlife filled sloughs in my flatboat: camping, canoeing, birding, hunting, fishing and waterskiing. In the winter we'd  skate and cross country ski on the frozen backwaters."

In writing and presenting talks, she enjoys finding the personal stories that make history come alive.  These talks are perfect for any group interested in learning the history and lore of our great American rivers. 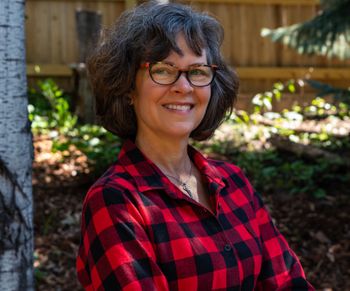 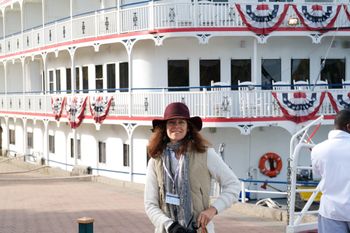 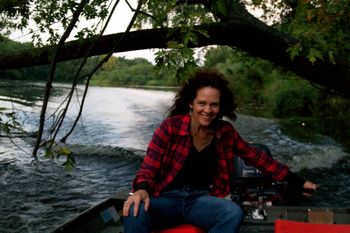 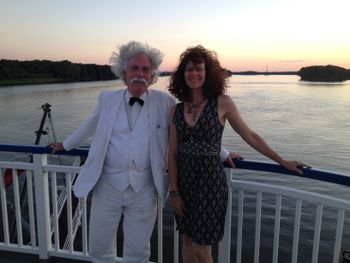 on the Mississippi with Mark Twain

The Pearl Button Boom: The Mussel Industry on the Mississippi River

Did you know that in the early 1900’s one third of the world’s buttons were made from mussels in the Mississippi and Ohio Rivers? This short lived but profitable business of making buttons from Mississippi mussels was worth 23 million dollars to our economy! This is a riveting tale of mussels, automation, industry, greed, fashion, ecology, and murder!

Rave Reviews
"If you are looking for a great speaker on an unusual topic, we highly recommend JoAnn's "Pearl Button Boom", an interesting and little known piece of history. She is not only warm and articulate but a pleasure to meet. You won't be disappointed." ... Jan Wolff, Program Committee Member, MN UU Fellowship

"Thanks! As a seamstress I so appreciated your talk. I was reminded of a Nancy Drew book where she and her boyfriend found an underground stream filled with shells with holes in them.  A former button factory!" ... Kathy Fischer-Eagle

Livin' On the river

Whether they are rugged individualists, dreamers, survivors or a combination thereof, many people have, and still do, make the river their home. JoAnn gives you fascinating insight into the lives of some of these most interesting people: shantyboaters, people who dream of kayaking the entire river and those who work on the river.

1811: A Roosevelt, A Comet, A Steamboat and The New Madrid Earthquakes

The year 1811: a 42 year old Nicholas Roosevelt (yes, related to "those Roosevelts!") with his plucky pregnant 19 year old wife, their 2 year old daughter, dog and crew make history by piloting the very first steamboat down the Mississippi, in a historic journey that would forever change commerce on the river.

The year 1811: A bright comet appears for months in the sky. Many were terrified of this, convinced it was a bad omen. Native people link the comet to the smoke and steam of this new steamboat. Others believe the comet causes the earthquake.

On December 16, 1811 the Roosevelts, the steamboat, the comet and the New Madrid earthquakes converged in time and place for an unforgettable and dramatic adventure!

Steve and JoAnn are in character (Lydia Roosevelt and a Keelboatman) as they tell this amazing and unbelievable story.  This true tale is highly entertaining, with incredible historical details and first person accounts.

Rave Reviews!
"By acting this story out you brought history to life! I had no idea we had earthquakes in the midwest - I never learned this in school!"
- guest, American Cruise Lines

The Mississippi River is one of the wonders of the world! It is the third longest river in the world - 2320 miles. Its watershed drains 41% of the United States. It is a major bird migration route.

It has captured the imagination of everyone from Lewis and Clark to Mark Twain. Many people from Europe travel here to see and experience the Mississippi.

JoAnn and Steve's Meet the Mississippi is a wonderful way to get an overview of the river: glacial origins, early exploring, commercial navigation, recreational use, the incredible story of the building of our locks and dams, differences in the the Upper and Lower Mississippi, migration, wildlife and more!

The Golden Age of Steamboats

Learn about the history of  this uniquely American form of river transportation and how it helped build our country.

Then settle in for a bit of expounding on the subject by Mark Twain!

The Western Rivers and The Civil War

When you think of the Civil War, do you think of the eastern United States? Think again! Learn why control of the Ohio River and the Mississippi River was so crucial to the Union’s victory in the Civil war. Hear the fascinating story of how this played out between the Union and Confederates and why Vicksburg, Mississippi was “the key”.