JoAnn Funk doesn’t sing a song as much as she whispers it in your ear.

This elegant, charismatic and sophisticated jazz singer pianist received a classical  piano performance and biology degree from the University of Wisconsin - Madison. She fell in love with jazz and has been a professional pianist ever since, performing  at  jazz clubs -  the Dakota, The Dunsmore Room - as well as Twin Cities and other  jazz festivals.  She and her bassist Jeff Brueske established Jazz in The Lobby Bar at the Saint Paul Hotel, performing regularly for nine years, from 2007- 2016.

As a singer, JoAnn's distinctively intimate and unique voice is often compared to Norah Jones, Diana Krall or Blossom Dearie, yet her warm vocal style is all her own. With a knack for finding great songs and overlooked treasures, she performs smartly arranged music from the songbooks of anyone from Nat King Cole and Blossom Dearie to Leonard Cohen and Madeline Peyroux. Blossom Dearie is indeed a favorite of hers - JoAnn has performed an entire show of Blossom Dearie songs.

In the tradition of singer pianists like Nat King Cole, JoAnn is equally comfortable performing as an instrumental jazz pianist as she is as a singer pianist. She has a sensitive, swinging and clean piano technique, and her jazz piano influences range from Red Garland and Erroll Garner to Oscar Peterson to Brad Meldau.

JoAnn has recorded four CDs, the first “Holidays”, a collection of fresh arrangements of Christmas songs, which won a top 10 award from Just Plain Folks in the year of its release, “Solo Piano”, a perfect collection of solo piano favorites - from Bach to Ellington and "Pick Yourself Up" featuring JoAnn as a singer pianist with her trio, released to great reviews in April of 2011. "Jazz in The Lobby Bar" was released in 2015 and has received international airplay.

Give Him The Ooh-la-la! The music of Blossom Dearie

"I've been greatly influenced by Blossom Dearie's piano playing, singing and selection of repertoire. Her songs range from the wry to the witty and heartbreaking. Her arrangements and sense of time are impeccable." -  JoAnn Funk

Songs in the show span her career, from the classic Verve recordings with Ray Brown to her later more pop oriented music, written by herself, Dave Frishberg or Sheldon Hartnick, to name a few.

"I perform this show with my trio, the incredible Nathan Norman on drums and my longtime bassist, Jeff Brueske.  I have taken her arrangements off of her albums, and naturally, since this is jazz, we add our own sense to each song. Audiences have been delighted; Blossom Dearie fans are very devoted!
- JoAnn Funk

Deck the Halls is a polished gem, packed with variety from three truly versatile performers: JoAnn Funk, baritone Steven Marking and bassist Vocalist Jeff Brueske. It combines the wow factor of virtuoso musicianship with hilarious storytelling and heartfelt expressions of the true spirit of Christmas.

Jazz Singer Pianist JoAnn Funk adds her wit and a swinging piano style and a smoky voice that is all her own.

Baritone Steven Marking moves easily between the gorgeous classics like O Holy Night, Silent Night and the sly swing duet Baby It’s Cold Outside, which he sings with JoAnn Funk.

After performing together for nine years for Jazz in The Lobby Bar at The Saint Paul Hotel, in St Paul Minnesota, JoAnn and longtime bassist vocalist Jeff Brueske have melded their considerable talents into a marvelous blend. The range of their music is breathtaking, drawing upon their various musical backgrounds and unique voices, both as soloists and in their duets. Wonderfully arranged tunes swing through the songbooks of Nat King Cole, John Pizzarelli, Diana Krall, Blossom Dearie, Bob Dorough and Tony Bennett to Norah Jones, Leonard Cohen, Dave Brubeck, Dan Penn, and Madeline Peyroux.

JoAnn has an intimate, swinging and smokey singing style all her own. Her vocals are perfectly accompanied by her tasteful piano playing. She is also an stunning jazz pianist in her own right  and their instrumental numbers shine.

Jeff is a solid bassist, creative and comfortable laying down a groove or bowing with his beautiful arco sound. His clear high baritone voice astonishes - it seems to be made to sing the great repertoire of the 1930's and 1940's. 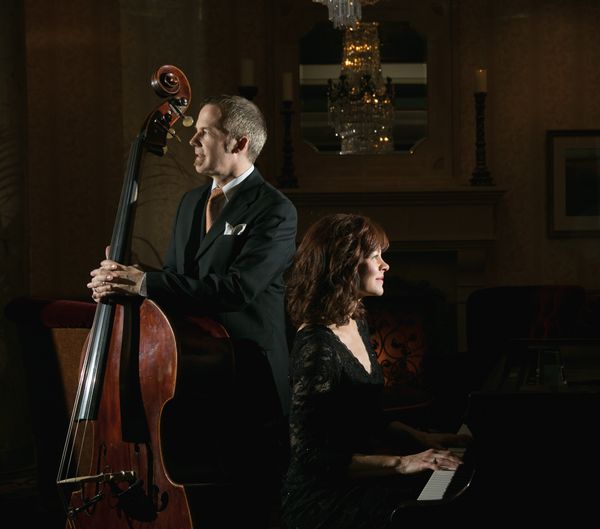